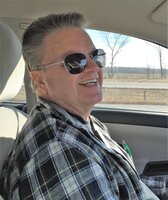 William G. Bushnell, Age 80, affectionately known as Bill or Mr. Bill, went home to be with his Lord on Friday, November 18, 2022 with his loving wife Sandy by his side at their home. Bill stepped into Heaven's chariot and took off for Heaven straight into the arms of Jesus. Bill was born March 2, 1942 in Macomb, Illinois and was raised on a farm in Blandinsville IL. He graduated from Western Illinois University and was then drafted into the Army. He served in Vietnam during 1967-1969. Bill worked in the electronic and audio-visual industry, and as a professional musician and as a helicopter pilot and flight instructor. Eventually he started his own computer business, Bushnell Associates. Bill was a man of many interests, but his main passions were encouraging people, building things, and playing in bands. Bill was used by God to bring emotional and physical healing to many people. He loved to pray with people and especially enjoyed his mission trip to Brazil and the Dental Mission Trip to Romania where he had such a key role on a small team. Bill played keyboards, bass guitar, saxophone, flute, and harmonica. In the 1960's he played with the rock bands The Castaways and The Rising Sons. Bill even managed to play saxophone with a band when he was in Vietnam! After his discharge from the Army, Bill was in the bands The Dynamics and Chain Reaction, playing at clubs and lounges. When Chain Reaction went on a USO tour to play for the military troops in various countries, Bill both played and ran the sound system that he brought with him. Bill always preferred the 70's rock music. Around 1981 Bill committed his life to Jesus Christ and in 1983 he married the love of his life, Sandy Fuller at Central Assembly of God in Horseheads, NY. Bill and Sandy were married for 40 years. Bill installed a sound system at the church and helped the church transition to contemporary worship music. Bill was also a long-time board member at Central Assembly. For over 20 years, Bill led or was on church worship teams. He later played with Second Wind and more recently with Deyo Road Band. Bill was predeceased by his parents Wendall and Alberta (Elder) Bushnell, his brother Edward (Rel) Bushnell and sister Jana Watkins, and brother-in-law Richard Fuller. He is survived by his loving wife Sandra (Fuller) Bushnell, his daughters Melissa (and grandson Kaleb Zimar) and Amanda Webb, and by the daughter of Bill's and Sandy's hearts, Ashley Brooks and her children Amber and Dante. He is also survived by Jim and Joan Fuller, Daniel and Kathy (Fuller) Golan, Michael and Jennifer Fuller, Daniel Fuller, and Steven and Tracey Fuller, his cousins, as well as many nieces and nephews, great-nieces and great-nephews. A celebration of Bill's life will be held November 26th at Central Assembly of God, 1 Brenway Drive, (off of Hickory Grove Rd) Horseheads, NY. Visitation is at 10 am, a Celebration of His Life at 11 am, followed by a meal for all at the church. Pastor Joseph Chamberlin will be officiating. The service will be streamed at www.facebook.com/CentralAGHorseheads. Our thanks and gratitude to all who prayed and helped us during this journey. While flowers are gratefully received, if you prefer, you may instead make a donation in Bill's memory to GlobalAwakening.com, an organization Bill so enjoyed being involved with. Inurnment will be a private ceremony at the Woodlawn National Cemetery in Elmira, NY. Walter J. Kent Funeral Home is assisting the Bushnell family.