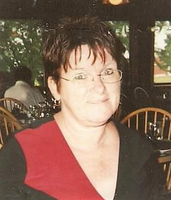 Shirley A. Wilson Age 63 of Elmira, NY passed suddenly on November 24, 2019. Shirley was born and raised in Millville, NJ to the late Paul Shaw and Sarah (Porter) Watson. She moved to NY at 17. Shirley was predeceased by her husband, Mike Wilson, her son, Michael Wilson, brothers, Robert (Finger Bandit) Shaw, Harry (Bud) Shaw, and a granddaughter, Madison Arnold. Shirley is survived by her daughters, Crystal (PJ) Townsend, Shelia (Darwin) Terry, Tracy (Jerry) Mcpeak, Charise Shaw and Misty Wilson; her daughter in law Renee Perry; multiple grandchildren, Kersten, Serenity, Delainey, Braylyn, Darien, Mitchell, Gavin, Katelyn, Morgan, Abby, Ian, Justin, Tranell, Kyrehl, Justin, Emma-Leigh Makenzie; great grandchildren, Bentley, Weston, Haylee, Havanna, and Elijah; her brothers and sisters Paula Shaw, Paul Shaw, Donna Kimber, Dolly Nadia, Alfred (Kenny) Shaw, and Jacqueline (Jackie) Myers; many nieces, nephews and cousins. Shirley was a care giver for many years before working at Capabilities in upholstery, then moving to Bethany Village working in laundry. Although she had many titles, she was first and foremost a Mom. Not just to her own kids, she was also a "neighborhood mom" to all of her children's friends as they were growing up. Her many hobbies included but were not limited to, crocheting, decorating her home, and yard sailing. A memorial service will be held December 8th at 3:00 pm at the American Legion, 316 Lake St. Elmira, NY. The family has asked that in lieu of flowers, donations be made instead to the American Cancer Society.