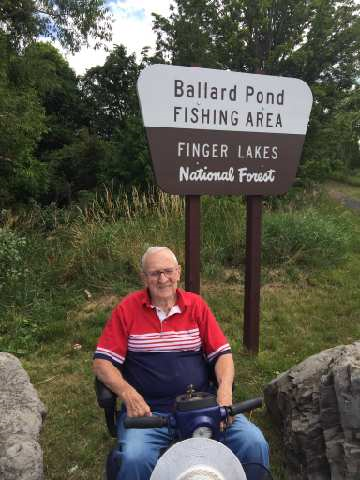 Ballard W. Eckert the Man, the Myth, the Legend. Ballard died peacefully in his home that he built in 1955. He was comforted in the care of his loving wife and daughters. He lived his life fully for 91 years. Born March 9, 1929 to the late Mark M. and Madeline (Ballard) Eckert of Sayre Pa. Ballard was a caring husband to his surviving wife of 35 years Mary Ann. Devoted father of seven. Pre-deceased by Daughter Kathleen Bartlett, sisters Isabel Post of Waverly, NY, Barbara Griffin of Elmira, Virginia Hulett of Las Vegas, NV and brother Mark M. Eckert Jr. of Fairport, NY. Survived by sons Timothy (Carolyn) Eckert and Steven (Eve) Eckert both of Cape Coral, Florida, daughters Dianne (Michael) Haner of Golden Glow, Melissa (Steven Sullivan) Eckert of Erin, Christine (Christopher) O’Donnell of Horseheads, and Lori (Brian) Becker of Beaver Dams, son-in-law Danny Bartlett of Caton, sister-in-law Sandra Kubler of Elmira Heights and brother Robert Eckert of Honolulu. Beloved Grandpa to Arlene (Keith) Clark of Corning, Katrina (Michael) Rush of Chicago, Elizabeth (Michael) Hart of Horseheads, Jillian Haner-Gee of Golden Glow, Amber (Jeremy Almon) Renko of Breesport, Zachary (Shelby D’Amato) Renko of Clearwater, FL, Jason A. Thiel of Horseheads and Davina M. O’Donnell of Horseheads. Proud Great Grandpa of 8 with the ninth coming in June. Several nieces and nephews. He was also special mentor to Samuel Tolbert of Hagerstown, Maryland, Larry Jessie of Erin, Natalie Rifenburg Smith of Tampa, Florida and Stacia Kelsey of Golden Glow. Ballard retired after 39 years of service to his country in the Armed Forces. In 1946, along with 3 of his childhood friends he enlisted in the Army. Then in 1948, he decided to enlist in the Navy. Ballard rounded out his service career as Sergeant First Class in the Army Reserves from 1955 to 1995. Ballard looked back fondly on his time in the service and enjoyed sharing stories from his adventures overseas. He took pride in having traveled across both oceans during that time. Aside from his military career, Ballard also worked 33 years at the Elmira Correctional Facility Power House. He was a lifetime member and past president of the Golden Glow Volunteer Fire Company. Ballard was a Scout Leader in Golden Glow and a Little League coach in West Elmira. One of Ballard’s greatest joys came from spending time with his family. Connecting his children to the great outdoor, they enjoyed spending hours fishing at local rivers, dams, streams and Lamoka Lake. He also traveled to Florida for deep sea and Everglades fishing excursions. Hunting with his children was a favorite. He would hunt locally, as well as travel to hunting camp in Georgia. Devoted Mets and Buffalo Bills fan. Special Thank You to the Bath VA HBPC Team for all their support and care over the last several years. In lieu of flowers, please consider donations to Golden Glow Volunteer Fire Company, 214 Hendy Creek Road, Pine City, NY 14871. Ballard will be interned in the Veteran’s Wall at Woodlawn National Cemetery in a ceremony at the family’s convenience.

Share Your Memory of
Ballard
Upload Your Memory View All Memories
Be the first to upload a memory!
Share A Memory
Plant a Tree