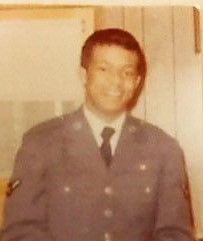 John West Emanuel age 70 of Elmira, NY. He was born July 1, 1951 to the late George W. and Helen T. (Davis) Emanuel passed away on March 1, 2022 at the Bath VA Hospital. In addition to his parents, he was predeceased by his grandparents Charles & Elizabeth (Jenkins) Davis and John & Isabelle (Bouie) Emanuel. John West is survived by his wife of 44 years Weonia (White) Emanuel and his sisters and brothers Francelia (Ralph) Newman, Mark Emanuel, Stephen Ashford all of Elmira NY and Deanna Ashford of Florence, SC. He is also survived by his in laws Melvin White, Margaret (Howard) Jones, Barbara (Jethro) Burch of Rochester, NY and Marvie (White) McGee, Marie White, Lillian White, Ronnie (Nora) White, Donald White, Andrew White and Alvin (Valerie) White of Elmira, NY. Although John never had any children, he showed tremendous love towards all of his nieces and nephews and was given the utmost respect. He is also survived by a host of cousins and special friends. John West was a graduate of Elmira Free Academy class of 1969. He enlisted in the US Air Force in 1970 and served through 1974. Upon returning from the Air Force, John worked at the Elmira Psychiatric Center before moving to California in 1976. While living in California, John West worked in the Telecommunication field until he retired in 2003. He relocated back to Elmira and opened Little George's Bar and Grill in 2004. John was an avid fisherman and love to compete with his cousins and younger brother Mark to see who could catch the largest fish. He was also very much involved with his family and would do anything to help his nieces and nephews. In 2017 John West suffered a stroke and was placed in the Bath VA Hospital. The staff at the hospital created a wonderful environment for him and gave him the nickname of "Hollywood". The family would like to thank the staff at the Bath VA Hospital and would like to recognize Kortnee McCormick for the extra special attention she provided to John. Family and friends are invited to visit St. Mary's Church, 224 Franklin St., Elmira on Tuesday, March 8th from 10:00 AM - 11:00 AM. His Mass of Christian Burial will follow at 11:00 AM. Rev. Richard Farrell, Celebrant. Interment will take place at Bath National Cemetery at the convenience of the family.
Tuesday
8
March

Share Your Memory of
John
Upload Your Memory View All Memories
Be the first to upload a memory!
Share A Memory
Send Flowers
Plant a Tree