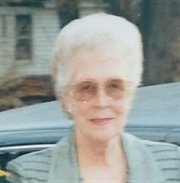 Obituary of Theresa A. Jessick

JESSICK, Theresa A. Age 80 of Horseheads, NY. She was born December 28, 1931 in Elmira, NY, daughter to the late Carl and Leora (Sampson) Eddy and passed away September 19, 2012. She was predeceased by her husband of 57 years, Thomas L. Jessick in 2008. She is survived by her son Thomas M. Jessick of Rochester, NY; daughter and son-in-law Debra M. &amp; Stephen Cembrinski of Cooperstown, NY; grandchildren, Stephen and Ryan Cembrinski, Marissa, Travis and Devon Jessick; sister, Shirley Cardone of Elmira, NY; sister-in-law, Margaret (Lisi) Eddy of Elmira, NY; and brother-in-law Paul Jessick of Elmira, NY. Theresa had been employed as an aide to spasmodic children at Center St. School in Horseheads and had served as Secretary for the Commissioner of Jurors in Elmira. Theresa spent her childhood years in Elmira. While attending school in Wellsburg, she was a cheerleader and loved doing cartwheels. It was during this time that she also became skilled at roller-skating and playing piano which she continued after marrying &quot;Tommy.&quot; The two of them frequented Joycrest Skating Rink and had their own special dance routine. After their marriage, Tom and Theresa worked hard to help support the family they started. Both held multiple jobs in order to provide the most they could for little Tom and Deb. They did take some breaks from work to enjoy bowling and softball. Some favorite family memories were made while vacationing on Seneca Lake each summer. Theresa was very supportive of her children's endeavors and took special pleasure in her grandchildren as they grew and began their own life adventures. In later years, especially after Tommy's passing, Theresa enjoyed spending time on her computer. Theresa will be remembered for the love she showed her family and the many friendships she made along the way. There will be no calling hours. Private funeral services with interment in Maple Grove Cemetery will take place at the convenience of the family. Walter J. Kent Funeral Home is assisting the family.
Services for Theresa Jessick
There are no events scheduled. You can still show your support by planting a tree in memory of Theresa Jessick.
Visit the Tribute Store
Print
Share A Memory
Plant a Tree