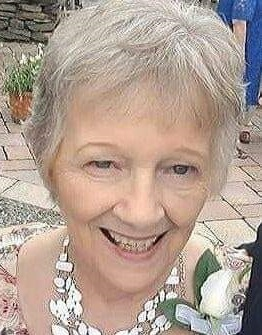 Cruise, Judith (Conklin) Age 82 of Elmira, NY went home peacefully, to her Lord and Savior, surrounded by her loving family, Tuesday, August 16, 2022 at home. She was born to the late Francis and Ruth (Rorick) Conklin. She was predeceased by her son Brian; husband Bill; brother David Conklin and sister Linda Robyler; and brother-in-law Tom French. She is survived by her children, son Kevin (Sara) with children Kristen, Andrew, Natalie, Kendall, Nolan and Oliver; daughter Shelly (Thomas) Hill with children Molly, Maureen, Nicole, Greg and Alex; daughter Cassie Steadman with children Jonathan, Josh, Brittany, Morgan, Seth, Alaina, Taryn and Caelin; son Jake (Jen) with children Ayden and Connor; sister Helen "oink" (James) Sullivan; sister Patricia French; sister-in-law Pat Conklin along with 5 great grandchildren, and 3 more on the way. She had many nephews and nieces whom she truly cherished. She was a active communicant of Elmira Catholic Parishes. Judy graduated from St. Joseph's School of Nursing, and in her early career was an RN with St. Joseph's Hospital where she made and continued lifelong friendships with her classmates and co-workers. Judy, along with her sisters and special niece, Deb Sullivan, owned and operated Conklin & Rorick Religious Gift Shop. The Conklin & Rorick family began this business in the 1950's. She was instrumental in bringing Compassionate Friends to the area and ministering to many other families who lost children. Family and friends are invited to visit Walter J. Kent Funeral Home, 858 Lake St. at Washington Ave., Elmira on Wednesday, August 31st from 4 to 7 pm. Her Mass of Christian Burial will be celebrated on Thursday, September 1st at 10:30 am in St. Mary's Church, 224 Franklin St., Elmira. Rev. Richard Farrell, Celebrant. Committal prayers and interment will follow in St. Peter & Paul's Cemetery.
Wednesday
31
August

Share Your Memory of
Judith
Upload Your Memory View All Memories
Be the first to upload a memory!
Share A Memory
Send Flowers
Plant a Tree